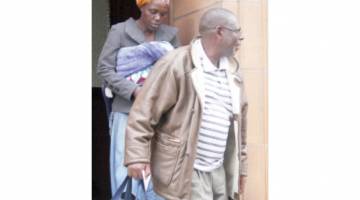 Violet Chikwezeze’s life has become a living hell due to a ‘spiritual husband’ (tikoloshe) who allegedly has forced se_xual inter_course with her.

This has caused her husband Lovemore Mandigora to deny her pleasure and their bedroom life has gone cold. In fact he has moved from the bedroom to the living room.

Chikwezeze made the shocking revelations at the Bulawayo Civil Court while responding to her husband’s complaints that she was abusing him.

“My husband does not treat me as his wife. He is not having se_xual intercourse with me. I feel I have a spiritual husband as something mysterious is sleeping with me, usually in the middle of the night. It’s been happening since January last year. When I refuse to sleep with that mysterious creature it violently attacks me, resulting in me bleeding from the nose and mouth.

“Surprisingly, whenever that is happening, my husband quietly moves away from the bed such that when I wake up I find him in the sitting room watching television and sometimes on his phone. He knows what is happening and does not want to assist me. Whenever I confront him he turns hostile and starts accusing me of being abusive,”

In response Mandigora admitted that his wife was being tormented by an invisible man.

“It is true that she is being troubled by a mystical creature, something I suspect is a spiritual husband. The problem started in January 2018. It is not true that I am refusing to assist her but the problem we are having is that she wants the problem to be solved by traditional healers while I want it to be solved by prophets. Turning to the issue of denying her conjugal rights, I am diabetic and it affects my se_xual performance,” said Mandigora.

Bmetro reports that the shocked magistrate referred the couple for counseling.