You are at:Home»Entertainment»Music legend Oliver Mtukudzi is given national hero status in Zimbabwe

It is the highest honor that can be given to an individual by Zimbabwe and Mtukudzi is the first artist to attain the status.
President Emmanuel Mnangagwa, who made the announcement Thursday, said the government would also cover his funeral expenses.
Mtukudzi was one the country’s most celebrated musicians and the Zimbabwe arts regulating body wrote to the President to seek the status for him.
“He deserves the status because of his hard work and leadership in the sector. He was a hero on his own and a hero of the people. His works deserve great honour,” Nicholas Moyo head of the National Arts Council of Zimbabwe said in an interview with The Citizen newspaper.
Popularly known as “Tuku” by his fans, Mtukudzi had been successfully performing for decades throughout Africa, as well as in the United Kingdom, the United States and Canada.

Africa and indeed the world has lost a great music icon, a legend whose music touched millions of people across the world. RIP Oliver Mtukudzi ? pic.twitter.com/buA0279c7Z

Born into a musical family in 1952, his foot-stomping music has been described as a mixture of Zimbabwean pop style “jit” and South African township pop.
Through his distinct sound and inspiring lyrics, he documented the joy and pain of his countrymen who fought for freedom under colonial rule and died for democracy after Zimbabwe’s independence in 1980.
“Where I come from you don’t get to sing a song if you have nothing to say,” he said in a 2013 interview with CNN.

Rest in peace Oliver Mtukudzi. If anyone ever made me proud to be #Zimbabwean it was you. Thank you for making us happy for so long, especially during the darkest days. pic.twitter.com/K5gsugnb2f

Mtukudzii grew up in Highfield, a ghetto neighborhood in the Zimbabwean capital of Harare. “So every song has something to do with that man in the street, he must be able to use it in his life,” he said.
The musician had more than 60 albums under his belt and released an album in 2013 titled “Sarawoga, a tribute to his beloved son Sam, who died in a car crash in 2010 at age 21. The pair often performed together and he described the album as “therapy” to help him get over the death. 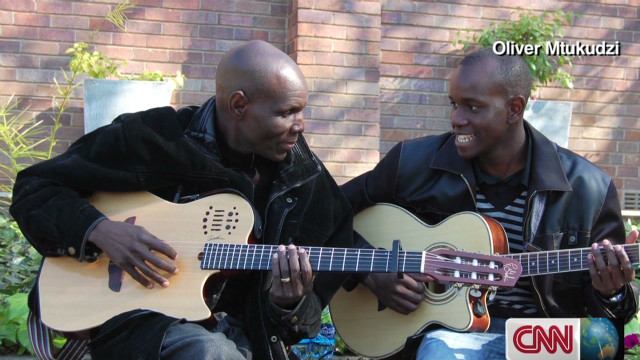 Oliver Mtukudzi remembers dead son 06:48
“I was just thinking of him and trying to recover, even though music was my therapy. I think I’ve performed more shows since 2010 up to today than ever before because that’s the only therapy I’ve got.”
Often called the spiritual father of Zimbabwe, Mtukudzi, who lost his brother Robert and several band members to AIDS, campaigned to eradicate the HIV/AIDS stigma against mothers in Tanzania.
He was also outspoken against patriarchy and criticized polygamy as a practice that increases the risk of spreading HIV.-CNN